More Americans now openly admit that they smoke marijuana or eat cannabis-infused edibles than say they’ve smoked cigarettes in the past week, according to recently released data from Gallup, with the pollster adding that cannabis consumption is likely to continue increasing even more in years to come.

That’s despite that fact that possessing marijuana remains federally prohibited and is punishable with jail time in some states, while tobacco remains perfectly legal across the country.

Trends in cannabis and tobacco use have been moving in this direction over the past several decades, as public health campaigns and other government prevention measures have taken aim at cigarettes while more states have started legalizing marijuana for medical or recreational use.

According to data from a survey conducted in July, a record 16 percent of Americans say that they currently smoke cannabis, while just 11 percent reported smoking a cigarette in the past week, as CNN noted in a recent analysis.

What’s more, Gallup also asked for this first time this year about whether people consume cannabis edibles, with 14 percent saying they do. That means that more people smoke or eat federally illegal cannabis than smoked a perfectly legal tobacco cigarette in the past seven days. 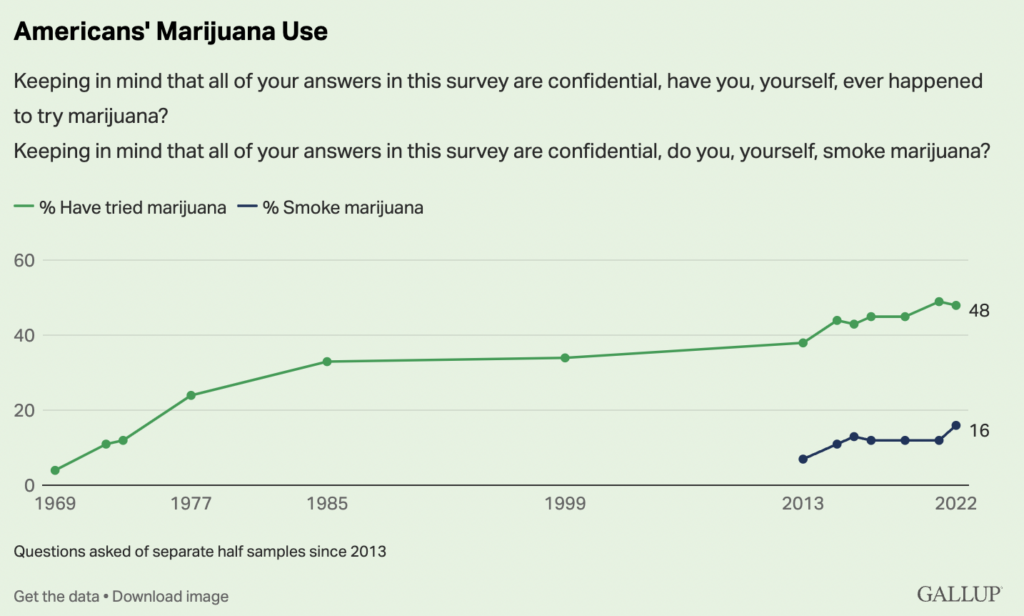 In 2013, the first time that Gallup asked about current marijuana use, just seven percent said they actively smoked cannabis. Around that same time, past-week cigarette use hovered around 20 percent, still down from a high of 45 percent in the mid-1950s.

Alcohol remains the most widely used recreational substance in the U.S., the data shows, despite broad recognition that liquor has harmful effects. Forty-five percent of respondents said they’ve drank alcohol in the past week, while 67 percent said they use alcohol occasionally. 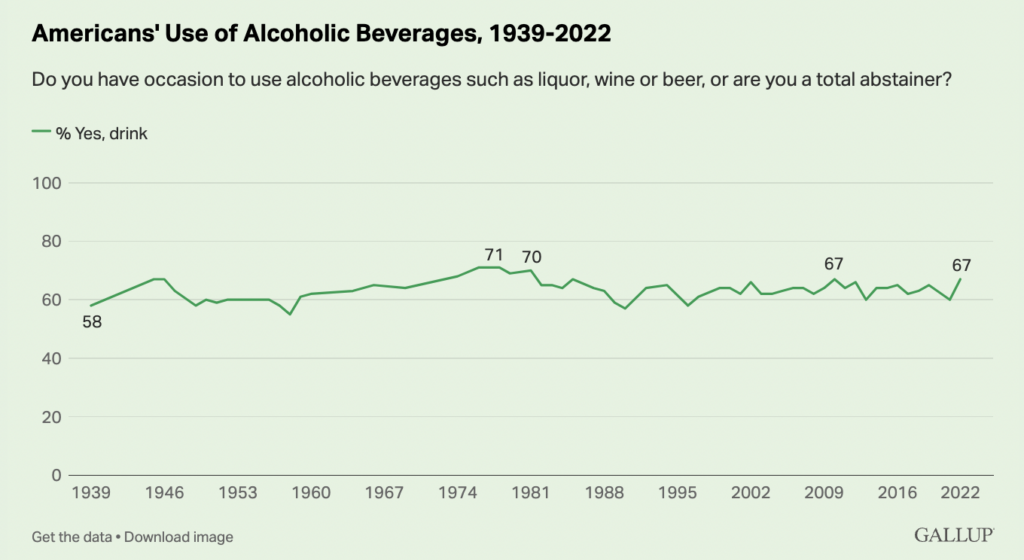 More than twice as many Americans think that marijuana has a positive impact on its consumers and society at large than say the same about alcohol, according to Gallup survey data released this month.

This is generally consistent with the results of a separate poll released in March that found more Americans think it’d be good if people switched to cannabis and drank less alcohol compared to those who think the substance substitution would be bad.

Interestingly, a 2020 Gallup survey separately showed that 86 percent of Americans view alcohol use as morally acceptable, compared to 70 percent who said the same about marijuana consumption.

“In sum, American adults are significantly more likely to use alcohol than either marijuana or cigarettes. And while alcohol consumption has remained relatively constant over the decades, cigarette use is now less than a fourth of what it was in the 1950s,” Gallup said in a new analysis. “Americans’ regular use of marijuana is modestly higher than cigarettes at this point, but the trend over recent decades in marijuana use is upward.”

The percentage of Americans who smoke has declined substantially in recent years. What does the future fold for Americans’ use of alcohol and marijuana? Learn more with Gallup’s latest analysis. https://t.co/ugDN9YqAg6

Frank Newport, Gallup senior scientist, said that that the “future of marijuana use is, I would say, somewhat up in the air, but the probability is higher that its use will increase rather than decrease.”

That’s based on observable trends in usage, the spread of the legalization movement in U.S. states, growing public support for ending prohibition and the fact that people generally perceive cannabis is less harmful.

“Americans recognize the harmful effects of smoking cigarettes, and smoking has declined significantly over the past half-century and can be expected to continue on this trajectory,” Newport said. “Americans are more ambivalent about the effects of smoking marijuana, and its future use by Americans will depend partly on changes in recognition of its potential harms and partly on the continuing shifts in its legality in states across the union.”

Another indicator that the trend is likely to continue in the current directions is the fact that young people are significantly more likely to say that they use marijuana than tobacco. Thirty percent of those under 35 said that smoke cannabis, while just eight percent of that same age group reported past-week cigarette smoking.

The data used for these reports is based on a survey where Gallup put the drug-related questions to 1,013 adults from July 5-26. The margin of error was +/- four percentage points.

Meanwhile, public perception aside, marijuana legalization does appear to be attracting more adult consumers in states with regulated markets. That’s partly evidenced by the fact that in states like Arizona, Illinois and Massachusetts have seen months where tax revenue from cannabis sales have outpaced those derived from alcohol purchases.

Outside of these mainstream substances, a pair of federally funded analyses—the Monitoring the Future survey and a separate study published in the journal Addiction—reveal that psychedelics have been steadily gaining popularity among adults, while underage people are generally losing interest in hallucinogens like psilocybin.

Senate Majority Leader Chuck Schumer (D-NY) on Friday made a “promise” to marijuana activists that he will introduce a bill to federally legalize cannabis before the congressional August recess—a statement tacitly acknowledging again that he hasn’t met deadlines previously put forward for the highly anticipated legislation. The leader and colleagues have been working on the …

Two key congressmen made waves in the marijuana community on Thursday by disclosing that there are high-level talks underway about putting together a wide-ranging package of incremental marijuana proposals that House and Senate lawmakers believe could be enacted into law this year. But multiple sources tell Marijuana Moment that issues under consideration go further than …

Rep. Troy Carter (D-LA) told Marijuana Moment in a new interview that he’s “happy to join the battle” to reform federal cannabis laws—and he’s optimistic that his new bill on expunging federal misdemeanor marijuana convictions could build on bipartisan progress that’s been made as congressional lawmakers work to craft a passable reform package that could …

Austin, Texas voters have approved a local ballot measure to decriminalize marijuana—a victory for activists who are also pursuing similar reforms in other cities in the Lone Star state. The measure, which was spearheaded by the progressive campaign Ground Game Texas, was ahead by an insurmountable lead of 83 percent to 16 percent on Saturday …