Kansas Democrats Push For Medical Marijuana Ahead Of Legislative Deadline

Congress Should Make It Easier For People To Get Pardons For Marijuana And Drug Convictions, Lawmakers Say At Hearing


“Marijuana raids used to make up a large percentage of our drug enforcement activities. With the legalization of marijuana, there has been a significant drop in those types of raids.”

By Brett Rowland and Tom Gantert, The Center Square

Drug raids in Detroit have fallen 95 percent since a peak in 2012, largely as a result of voters’ decision to legalize recreational marijuana and shifting other police priorities.

The 95 percent decline in drug raids in the city is the result of a combination of factors, Detroit police officials said. One clear factor: Voters approved a 2018 ballot measure to legalize recreational use and possession of marijuana for those 21 and older and imposed a tax on marijuana sales. The measure passed with 56 percent of voters supporting it.

“Marijuana raids used to make up a large percentage of our drug enforcement activities,” he said. “With the legalization of marijuana, there has been a significant drop in those types of raids.”

But that’s not the only factor. The decline in drug raids began well before voters passed Proposition 1 in 2018 and recreational sales began in December 2019. 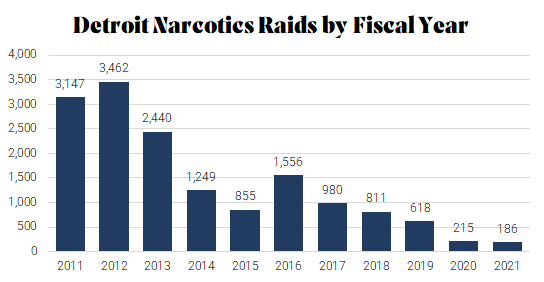 “The very nature of drug sales has changed a great deal in recent years,” he said. “The neighborhood drug house is much less of an issue than it used to be. Dealers, to a much larger extent, are no longer selling from fixed locations, such as a vacant house. Instead, they are setting up individual meetings at various locations with their customers. That makes them harder to track, but it also creates less of a neighborhood nuisance if there is not a stream of activity at one location.”

Fitzgerald said the department is focused on what residents are concerned about in their neighborhoods.

“Today, the complaints we are getting the most are things like neighborhood speeding and drifting, or large crowd control during the summer, as opposed to drug locations, so we have adapted our enforcement efforts to reflect citizen complaints,” he said.

Crime remains a problem in Detroit. Almost three in 10 city residents said they had been the victim of a crime in the past year, according to a 2021 Detroit Metro Area Communities Study from the University of Michigan. Detroit had the fifth most violent crimes in America per capita in 2021, according to data from the Federal Bureau of Investigation. In 2021, there were 11,908 violent-crime incidents and 14,677 offenses reported by the Detroit Police Department, a relatively flat statistic compared with the prior year.

“Overall, the analysis shows violent and property crime remained consistent between 2020 and 2021. While the aggregate estimated violent crime volume decreased 1 percent for the nation from 1,326,600 in 2020 to 1,313,200 in 2021, the estimated number of murders increased from 22,000 in 2020 to 22,900 in 2021. The increase of murders constitutes a 4.3 percent increase. The robbery rate decreased 8.9 percent from 2020 to 2021, which heavily contributed to the decrease in overall violent crime despite increases in murder and rape rates at the national level. It is important to note that these estimated trends are not considered statistically significant by NIBRS estimation methods. The nonsignificant nature of the observed trends is why, despite these described changes, the overall message is that crime remained consistent.”

The city projects it will spend $366.8 million on police in 2023, more than double any other city agency.

This story was first published by The Center Square.

SAFE Banking For Cannabis Is A Social Equity Issue (Op-Ed)

The governor of North Carolina is officially backing marijuana decriminalization in the state, saying it’s time to “end the stigma” and announcing steps he’s taken to explore his options for independently granting relief to people with existing convictions. Gov. Roy Cooper (D) spoke about the policy on Friday during a meeting of a criminal justice …

How To Roll A Swisher: A Step-By-Step Guide

Honest Marijuana operates in compliance with state laws regarding access to cannabis. You must be 21 years of age or older to view this website. By clicking “I agree” you swear and/or affirm under penalty of perjury that you are at least 21 years of age. Nothing on this website should be considered legal advice …

Colorado And Washington Got More Tax Revenue From Marijuana Than From Alcohol Or Cigarettes In Fiscal Year 2022, Report Finds

Colorado and Washington State took in more revenue from marijuana sales than from either alcohol or cigarettes in Fiscal Year 2022, according to a new report. Another eight states saw tax revenue from cannabis outpace cigarettes, while Nevada took in more from marijuana than alcohol. The analysis, published by the Tax Policy Center on Wednesday, …

An Arkansas marijuana legalization initiative is on the ballot on Tuesday, one of five states where voters will decide on the reform this election. Responsible Growth Arkansas is the campaign backing the measure, which would create a regulated cannabis market for adults 21 and older. Polling generally leaned in the campaign’s favor in the run-up …

If Ohio is going to legalize marijuana this year, it’s probably going to need to happen at the ballot, a GOP state lawmaker who is cosponsoring a legalization bill said last week. At an event hosted by Ohio State University on Thursday, Rep. Ron Ferguson (R) expressed disappointment that the Republican-controlled legislature has declined to …