California officials launched a new resource on Thursday, providing people with an interactive map showing where marijuana businesses are permitted—and where they are blocked from opening—throughout the state.

The tool draws attention to the fact that more than half of the state’s cities and counties do not allow any type of cannabis licensees to operate in their area, which advocates say is a problem that has allowed the illicit market to thrive despite voter-approved legalization.

The map from the Department of Cannabis Control (DCC) doesn’t identify where to find dispensaries that are open, per se (though the agency does have a separate online resource where consumers can find individual licenses businesses). But the new tool does break down how many cities in a given county allow retailers, distributors, manufacturers, cultivators and testing facilities.

“This data helps Californians understand the work we have ahead of us in realizing the promises of cannabis legalization, including supporting access to a safe, legal, and equitable cannabis market across the state and combating the unregulated, illicit market,” DCC Director Nicole Elliott said in a press release. 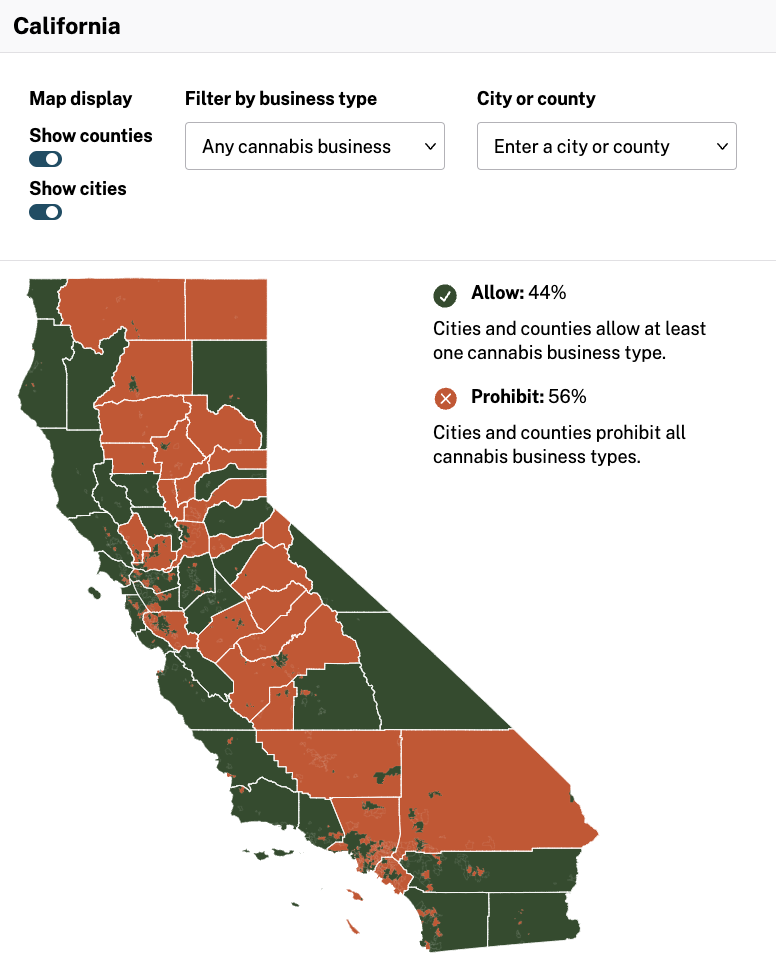 Currently, 56 percent of California cities and counties have opted out of allowing any form of cannabis business from operating. An even greater fraction, 62 percent, don’t permit retailers specifically, which would theoretically increase demand for unlicensed sales for people unwilling or unable to travel to a different part of the state for marijuana.

DCC said that it intends to build upon the resource with feedback from the public and stakeholders, and it will be providing additional assets to promote consumer education in the future.

With respect to improved access to cannabis, state Sen. Scott Wiener (D) is sponsoring legislation that would allow for medical marijuana delivery services for qualified patients anywhere in the state, regardless of local policy. That bill cleared the Senate on Monday and is now awaiting action in the Assembly.

Meanwhile, the governor of California unveiled an updated budget proposal earlier this month that calls for the elimination of the state’s marijuana cultivation tax and revised cannabis tax revenue allocations.

The budget also calls for the creation of a one-time “cannabis local jurisdiction retail access grant program” to support the development and implementation of local retail licensing efforts. The $20.5 million for that program would come out of the state general fund. Localities that license equity applicants could receive additional funding.

Newsom said this month that the goal of the initiative is “addressing the persistent issue that is exactly what we anticipated would be a persistent issue—and that’s dealing with the black market, going after the illegal growers and the illegal operators.”

California officials also announced in January that the state had awarded $100 million in funding to help develop local marijuana markets, in part by getting cannabis businesses fully licensed.

DCC distributed the funds to 17 cities and counties where there are a disproportionate number of provisional marijuana licenses, rather than full-year licenses. The department first announced that applications for the Local Jurisdiction Assistance Grant Program had opened in October.

Also last year, the state said it was awarding about $29 million in grants to 58 nonprofit organizations, with the intent of righting the wrongs of the war on drugs. The funding is being provided through the California Community Reinvestment Grants (CalCRG) program.

Grants are being awarded to qualifying nonprofits to support programs aimed at providing job placement, mental health treatment, substance misuse treatment and legal services for disproportionately impacted communities. The program was first announced in April 2020, and applications for those grants were initially opened in September 2020.

Officials with the California Department of Fish and Wildlife also said last year that they were soliciting concept proposals for a cannabis tax-funded program aimed at helping small marijuana cultivators with environmental clean-up and restoration efforts.

Illinois Marijuana Sales On The Rise Again, With $132 Million Of Cannabis Sold In April

Michigan broke a marijuana sales record in April, with nearly $200 million in cannabis purchases, state data shows. The state saw about $168 million in recreational marijuana sales and $27 million for medical cannabis, for a total of nearly $195 million. Andrew Brisbo, executive director of the state Cannabis Regulatory Agency (CRA), broke down the …

The Oklahoma House of Representatives on Monday approved a bill to decriminalize low-level possession of psilocybin and promote research into the therapeutic potential of the psychedelic, sending it to the Senate. The legislation, sponsored by Rep. Daniel Pae (R), cleared the chamber in a 62-30 vote. This comes one month after the measure advanced through …

The House sponsor of a marijuana banking bill says he recently spoke with Senate Majority Leader Chuck Schumer (D-NY) at an event at the White House and discussed the need to enact the bipartisan reform this session. Rep. Ed Perlmutter (D-CO) said that he impressed upon the leader the importance of his Secure and Fair …

A first-of-its-kind taxpayer-funded marijuana PSA aired in most of New York during an NBA Finals game on Thursday, boldly addressing the racially discriminatory harms of cannabis criminalization and highlighting steps that state regulators are taking to right the wrongs of prohibition. However, one major TV station refused to air the spot. The Office of Cannabis …